We must say we are somewhat surprised we didn’t find the Michigan registered Not Gay Volkswagen Beetle ourselves. Somehow it popped up on a Reddit post, which we can’t find any longer, so original credit goes out there somewhere.

However in our search for the Michigan plate post to give some credit we found that there is at least two vanity license plated VW Beetles with the same idea. 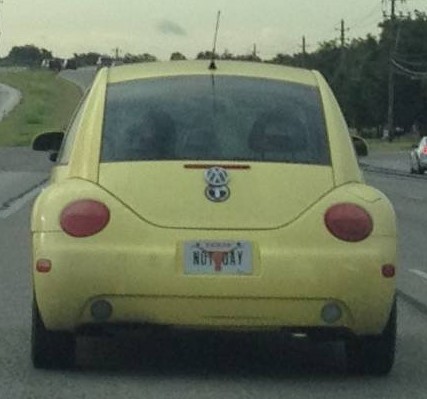 A driver (Reddit poster dccse3k) captured another driver in Texas thought it was also a great idea to have the same vanity license plate, on essentially the same vehicle however registered in Texas, which probably does make it more…ironic we suppose. As Texas has all of the macho cowboy, oil rigger manly men stereotypes.

For those of you really sharp readers you note this Texas vanity license plate also has the Texas steer license plate, which is pretty famous movie quote from the movie Full Metal Jacket.